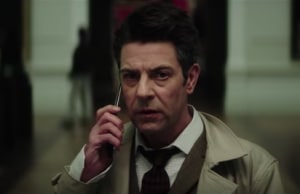 The Colombo type detective with a knack for missing the obvious in search of a bigger mystery, questions why anyone would pay more for their insurance, debuted last night.

In this epic two minute 30-second spot, Sarge must investigate a series of unexplainable incidents around the city, involving dragons, green slime and a zero-gravity house.

Something is clearly amiss and Sarge works out that each of the people involved in these weird events has paid over the odds for insurance.

Sarge may have unusual methods but the guy is a genius, working out that if you go to Budget Direct you can save, or so we are told.

The campaign was developed by Budget Direct's long-time agency 303 MullenLowe, who also developed the Captain Risky campaigns, and was shot by British director Daniel Kleinman, through production company Goodoil.

Kleinman is well-known for his award-winning commercial work as well as the James Bond film title sequences.

“It’s been a privilege working with such a talented team and courageous brand on a new campaign of this scale. Over four years Captain Risky became a household name and helped Budget Direct to become Australia’s fastest growing car and home insurer,” Morgan says.

“Not one to rest on their laurels, Budget Direct challenged us with another unique brief, and it’s been a pleasure to create the new campaign that truly reflects Budget Direct’s ambitions to lift the bar once again.”

Budget Direct chief marketing officer Jonathan Kerr added: “We set out to make Budget Direct’s new marketing campaign just as innovative, engaging and unique as our ability to offer award-winning insurance for less. Now that we’ve got Sarge on the case, we hope Australians enjoy the ads and in turn consider our message even more.”

A long version of the TV ad launched on Sunday night, across programs such as Sunday Night on Seven, 60 Minutes on Nine and The Project on Ten.

The longer spot will also run on cinema and YouTube. A 60-second version of the TVC also starts its run on Sunday.

Captain Risky had been the face of the budget insurer for the past three years and had become a big part of the brand's identity, with the character becoming well-known in Australia for his risky stunts, behaviour and approach to life.

In campaigns gone by, Australians had seen the captain take on outrageous ski jumps, pilot a rocket car and famously ride a dirtbike through his own home.

The latest campaign sees all of this ditched in favour of a refreshed brand approach, new character and the possibility of multiple further 'cases' for detective Sarge.