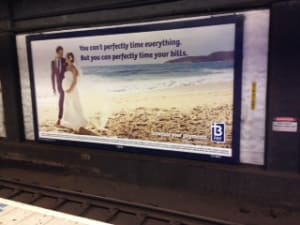 A billboard for electronic bill payment system Bpay showing a pregnant woman in a wedding dress and the tagline “you can't perfectly time everything” has drawn complaints for being inappropriate.

The billboard ad, currently running in Sydney aims to promote the benefits of Bpay's scheduling system. It shows an image of a pregnant woman in a wedding dress, and juxtaposes it with the headline “you can't perfectly time everything. But you can perfectly time your bills.”

The Advertising Standards Bureau (ASB) were able to confirm to AdNews that the billboard had received a complaint.

While the watchdog were unable to detail which sections of the advertising code the complaint falls under it did say the case would now be going to the board for determination.

It is only the second time a Bpay advertisement has been investigated by the industry watchdog, with a complaint against one of its radio advertisements dismissed in 2004.

“The advertisement was not designed to cause any offense. The creative was designed to be a fun way to demonstrate how paying everyday bills with the Bpay Scheduler feature gives you complete control over your payments and the time they are paid.”