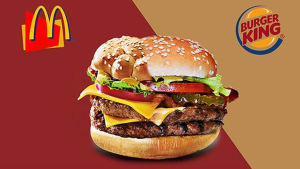 A small agency from the bottom of the world made a name for itself on the global stage with its attempt to bring together arguably two of the biggest global brands for World Peace Day. McWhopper is cleaning up at Cannes Lions this year and has already got a Grand Prix, four Gold and two Silver lions at the last count. It’s likely to get a few more.

But there’s more to Y&R NZ than the McWhopper. It’s the tale of an agency revived.

After a haul of awards at D&AD and AWARD that would make any agency jealous, Y&R was always likely to repeat that performance at Cannes this week. Although ahead of Lions the team didn’t want to be drawn on expectations for Lions this year.

McWhopper is a fundamentally simple idea, but it’s one of those big ideas that belies layers of complexity. The idea was a few years in the making, as is the success the agency is currently enjoying. It’s a tale of perseverance from an agency to get a big idea across the line and bravery from a client to say yes. Although now its reaping rewards, it didn’t start out as a yes.

Five years ago, Y&R was decidedly different place. It wasn’t winning awards locally, or overseas. It had a staff of around 30, and it wasn’t in great shape. Josh Moore, CEO and CCO, was brought in to turn that around.

It was in the downward phase of the inevitable cycle that all agencies go through. It didn’t have a great reputation, it wasn’t making award winning work, and it certainly wasn’t making global headlines. Now it’s expanded to more than 100 people, is in new offices, has a raft of new people, and has inched up the agency rankings, but its reputation is changing faster overseas than it is at home. Interestingly, McWhopper, while turning heads at international shows, hasn’t lit quite as many fires at home grown award shows in New Zealand awards.

At AWARD, Y&R also took home the Agency of the Year in May. It’s this that Moore says is worth most to the agency because it shows how far the it has come.

As the only shop in Y&R’s global network that is a full service media offering, it’s got a unique positioning. Just 15% of clients are purely creative, 25% are media clients meaning 6% of its client base are integrated creative and media.

Moore told AdNews: “When we started to rebuild the agency we wanted to be really integrated – not just the integrated of old that had media, account service and digital together – there’s a difference between full service and integration. There was a proper opportunity to reinvent what integrated really looked like.”

McWhopper was the first big idea that the agency was consumed by as it started its rejuvenation but because Burger King in New Zealand was a media client rather than creative, it went beyond the scope of the agency’s remit.

“The first time we went to the NZ client with the idea they looked at us like we were crazy. Then when we back again the year later we got a similar response,” he says.

Not ready to give up on it, the third time Y&R went back the the client with the idea, James Woodbridge had taken over as head of marketing. While he embraced the idea – it went beyond the New Zealand business’ remit too. So the local business enabled Y&R to take the idea to the global client Fernando Machado, senior vice president for global brand, and sell it in as a strategic brand idea.

“It was too big, too scary for the brand and it needed to go to a global level,” added Jono Key, head of planning.

“It’s one of those ideas that everyone loves but no one was keen to sign it off so it got pushed up the levels until we found someone who had the balls to out their name to it.”

Part of the secret to getting the global client interested in making the idea a reality came from the intrigue in the unknown from New Zealand, playing on the small-town naivety card and a little tactical “pretending not to know the rules”, according to Key.

After winning over Machado, who likes to challenge the norm, he then had to get McWhopper past the board and CEO of what is a massive corporate organisation, and the team faced a little “resentment and scepticism” at the start from other agencies and parties that work on the Burger King brand but some plucky New Zealand charm helped.

Moore adds: “I think some of the reason that we got it signed off was that there was as certain sense of our naive – the might as well let us approach it. If you were a big global [agency] and knocked on the door very formally to try to get a meeting – there would have been a lot more wariness, and it would look like a play for the account.”

“There was an element of not taking no for an answer in a naïve, charming way. We took to taking (popular NZ lollies) Pineapple Chunks to meetings.”

So after a hard sell, the hard work wasn’t over when the client said yes. The next step was to figure out how to execute it when the possible outcomes were so uncertain. Burger King couldn’t rely on any response from McDonald’s, and so in building the campaign the team prepared for any possible outcome.

Creative director Tom Paine outlines that it planned for almost every possible scenario; If McDonald’s agreed to play along, if it ignored it all together, if other fast food brands got involved - each of which could positive, or spiral out of control if not handled with care.

Ahead of the launch, the agency carried out research polling 2000 people across the US on the idea, as well as vox pops with people in New York’s Time’s Square and were comforted that it as “unanimously loved,” says Paine.

When it came to World Peace Day, a cross-agency team of 12 were in a bunker in New York ready to push the button and respond to whichever scenario played out.

While the best outcome in Y&R’s eyes was for McDonald’s to play along and say yes, the greater objective was to raise awareness for World Peace Day (and improve brand metrics around Burger King). And that was achieved with, or without McDonald’s.