Bachelor in Paradise slips to 539,000 viewers 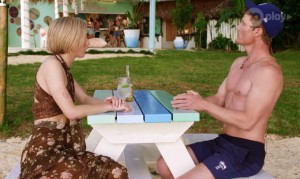 Bachelor in Paradise season two has slipped further in its second episode for the year, drawing in 539,000 overnight metro viewers.

Despite Ten touting last night's "confrontation" between former Bachelor couple Richie Strahan and Alex Nation as one of "the most anticipated moments" of the season, the show was unable to improve on it's Tuesday night debut.

Ten had used the union between the two former contestants throughout its marketing push for the show.

The show launched its second season to 553,000 overnight metro viewers, down significantly on its season one viewership by over 150,000. Last night the show shed a further 14,000 viewers.

MKR and Seven's news bulletin lead the channel to secure it's second overnight main channel win in a row, taking a 23.6% audience share.

Nine, despite not having a tentpole program running in primetime, was able to take second place with a 15.5% share.

Ten continued to struggle, coming close to a single digit main channel share, with 11.1%. The network was once again beaten by public broadcaster the ABC, which had a 13.9% share.