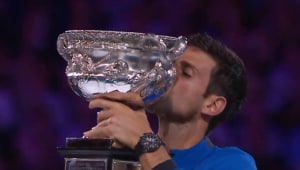 "All rights across all platforms" has paid off for Nine as its total summer of tennis coverage takes a cumulative reach of 9.47m in metro regions.

On top of this reach, which accounts for the total number of unique viewers across the tournament, coverage of the men's Australian Open final drew in 1.58 million viewers on Sunday night, as Novak Djokovic defeated Rafael Nadal in straight sets to out his historic seventh Australian Open title.

The women's final, played the previous evening, also drew over one million, as an overnight metro audience of 1.17m tuned in to see Naomi Osaka beat Petra Kvitova, in a nail-biting three-set match.

Nine’s total summer of tennis across the two weeks reached a national audience of 14.482 million viewers, with a metro audience of 10.33m and a regional viewership of 4.14m.

The broadcasts of the Hopman Cup, Brisbane International, Sydney International and Australian Open, were watched by 57% of the population.

Nine director of sport Tom Malone tells AdNews that the event had "exceeded all expectations", pointing out the growth in the people 16-39 demographic across the 14 days, as well as the significant digital engagement.

"The revenue has exceeded all expectations as well and as we expect, the revenue is going to sit around the $45 million mark which is a fantastic result."

The coverage across the four tournaments saw more than 6.2 million stream starts recorded on 9Now, with a total of 121.8 million minutes of content streamed.

The Australian Open has driven 9Now to record highs, securing a 78% share of live content consumed across the commercial free-to-air networks throughout the duration of the event.

This year marked the first summer that Nine was without the cricket, following the sports broadcast rights shake-ups from 2018.

Malone said the cricket is subject to dilution not only by volume, but dilution by distribution, due the nature of the current deal with Cricket Australia, which sees the sport's broadcast spread across both Foxtel and Seven for each code.

"But if you want to be part of the Australian Open, the only way you can access that content is through a Nine platform," Malone said.

"Looking at the numbers we produced, not just through our linear channels but digital as well, advertisers know that when they spend with us, no matter the distribution, they'll always be attached to the content. That was one of the key factors of acquiring the rights the way we did."

Nine won the rights this year, scooping the 2019 tournament for $11 million, adding on to its original $300m five-year deal.

Malone added that Nine and Tennis Australia's relationship played a major factor in the success of the tournament but said there is always more that can be done over the next few years.

Labelling Tennis Australia "pure innovators", he said its efforts with both Nine and its partners highlighted the strength of the event and proved further opportunities for growth, particularly with younger demographics.

Malone said the success of the coverage, especially on 9Now, was proof of its strategy in the live sports coverage space, adding that networks need to have "all rights across all platforms" if they are going to grow audiences, with digital viewership becoming an invaluable part of sports rights deals.