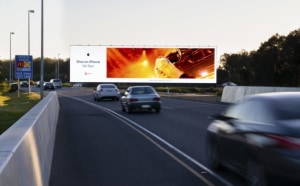 Brendon Cook, arguably one of the best executives in the world in the out of home advertising business, will leave a deep experience hole when he departs as CEO of oOh!media.

Analysts say Cook’s departure is to be regretted but the move isn’t a disaster for oOh!media which is generally well positioned, with market leading inventory, despite a weak advertising market.

Investment houses rate the company highly to get exposure to outdoor advertising. Morningstar is maintaining its $4 fair value estimate of oOh!media shares, against $3.37 in the latest trade. Credit Suisse has a target of $4.50 and an outperform rating.
However, the new CEO will still need to make hard decisions, including a look at costs and whether or not to slow the rate of digital screen rollouts.

oOh!media is now searching globally for a replacement CEOL. However, it is understood there are internal candidates with their hands up.

The company founder’s move will impact on investor sentiment for the ASX-listed company which already given notice of lower earnings, the extent of which will be revealed in February when oOh!media posts its annual results.

“We are surprised by CEO Brendon Cook's decision to step down this year, given he has devoted almost his entire professional life to oOh!media, a group he founded in 1989,” says Brian Han, senior equity analyst at Morningstar.

“The uncertainty caused by this leadership vacuum is likely to weigh on investor sentiment.”

In August the out of home advertising specialist downgraded guidance in an "extremely tough" advertising market being felt by all parts of the ad industry.
The company then put expected underlying EBITDA (earnings before interest, tax, depreciation and amortisation) between $125 million to $135 million.
In December, the company upped this to be between $138 million and $143 million.
oOh!media, which had been a beacon of light in a tough advertising market, saw a fall in bookings, post the close of the financial year, for its big roadside billboards.
Business picked up in the December quarter but, in announcing Cook’s departure, the company now says earnings will be to be at the lower end of the $138 million to $143 million range.
“In the absence of any additional information, we choose to take Cook's resignation at face value, rather than reading anything untoward into the announcement,” writes Han in a note to Morningstar clients.

“While his operating prowess and commercial acumen will be missed, a fresh set of eyes on a new CEO may revitalise the business.

“It may also provide fresh energy to execute Cook's three plank strategy to help grow outdoor industry's advertising share, comprising data (to illustrate effectiveness), content (to improve appeal and integration with other media) and service (to make it easier for advertisers to use outdoor), all in addition to continuing inventory digitisation.”

Cook has a big incentive to see oOh!media continue to prosper. He owns more than a million shares and 416,000 performance rights.

He’s staying on until a replacement is in the chair and then will continue as a consultant to the company.

Analysts at Morgans say a new CEO will face some tough choices surrounding operating and capital expenditures early on.

“The key question is whether the current lull in demand is temporary, or a sign of the end of the period of extraordinary growth in outdoor advertising seen over the past decade,” the analysts write in a note to clients.

“Cook has been a fixture at OML and its predecessors for more than 30 years and the departure of a safe pair of hands will prove unsettling for investors in the near term.

“With demand for outdoor advertising the weakest it has been for more than a decade, the company will need capable leadership to avoid further downgrades to earnings expectations for FY20.

“Key decisions will need to be made in the near term on the rate of roll-out of new digital formal billboards and on whether or not operating expenses need to be trimmed to respond to weaker advertising markets.”