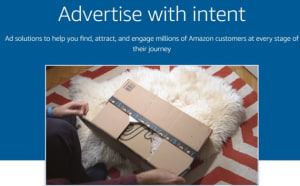 The US-based company is reported to be beta testing with a select group of Australians who sell their own goods on its local platform, amazon.com.au.

Like Amazon's previous moves in Australia, the advertising unit is going for a slow build as the data to support it -- the buying habits of its customers -- becomes deeper and more targetted for the local market.

Analysts at eMarketer estimate Amazon attracted so much advertising spend that it 2018 it became the third largest digital ad seller in the US, ahead of Microsoft and Oath and behind Facebook and Google.

Amazon doesn't release separate numbers for its advertising division. For 2018, Amazon reported $US10.1 billion for its category called "other". In the fourth quarter "other" revenue was $US3.4 billion and most of that was for advertising services.

"Advertisers know the Amazon audience is huge and primed to buy, and that Amazon’s platform will allow them to target based on real shopping and buying data -- not just demographics and interests," say the analysts at eMarketer. "Organic growth is the main driver in 2018, as brands get more sophisticated about Amazon and more ad budgets for the platform are coming from digital advertising buckets rather than ecommerce."

The big advantage for Amazon is that it sells directly to customers and has a mountain of behavioural data on buying.

“They are launching in this market in April and it's going to completely change the landscape for everybody in this room," Tim Whitfield, CTO at Burst SMS, told a session at this year's Programmatic Summit in Sydney.

Whitfield, a programmatic media specialist, later told AdNews that Amazon has a culture of working with data. Employees, no matter where they sit, must be able to code so they can extract their own data to make better comemrcial decisions.

"Amazon is very good at collecting and analysing that data," says Whitfield.

"Other companies, even Google, have fragmented data into different systems. With Amazon, it's all in one system."

Amazon has been building its presence in Australia, disrupting the online retail sector with the launch in late 2017 of local website amazon.com.au, the opening of massive fulfilment centres, launching Amazon Prime last year and showcasing Australian fashion.

The advertising industry is next.

"I dont' think everyone has really got their head around how big it is yet," Whitfield told AdNews.

Amazon isn't saying anything at the moment but, according to its website, is recruiting for the ad sales team.

The 13 roles open at Amazon in Sydney include consultants to work on the demand-side platform that enables advertisers to programmatically buy display and video ads, a senior advertising sales manager, a sponsored ads program manager, and "an experienced senior campaign and creative Manager (CCM) to launch our team in Sydney".

However, the role of head of advertising is open since Henry Tajer, who was appointed to head the Amazon Australia unit in August last year, moved to Dentsu Aegis Network as the local CEO starting in February.

The loss of knowledge of the local market was considerable. Tajer has two decades of experience spanning media, creative and digital services.

Mitch Waters, now The Trade Desk's senior vice president of South-East Asia, says Amazon in the US has been found to be good with its own platform but less so with the rest of the internet.

"The challenge for a brand is that there are a handful of categories in the world that Amazon doesn't compete," he told AdNews.

"So how comfortable are you as a brand manager to be handing over a bunch of your own client data for them (Amazon) to mine and potentially become a massive competitor?"

For small third party sellers Amazon is a significant opportunity, a way to access a large market of buyers.

For consumers, some deals are good but others aren't. The latest analysis by investment bank Morgan Stanley finds  that Amazon isn't always cheaper than local Australian stores.

"We think this highlights the importance of Amazon's 1st party stock levels (the goods Amazon sells directly itself) and range."

In a price check, Morgan Stanley found JB Hi-Fi more competitive than Amazon in Australia but supermarkets and Rebel less so.

Alen Allday, an analyst at IBISworld, says the launch of Amazon Advertising here will make it easier for those local businesses selling via the Amazon platform to coordinate campaigns, create display and video ads and to drive traffic to product pages.

"The sheer scale of Amazon, and the vast array of goods and services it sells, means it has taken market share (in the US) from Google and Facebook over the past 12 months," says Allday at IBISworld.

"Google and Facebook will lose some market share, but will likely respond by offering better services and/or lower pricing.

"Amazon Advertising services are reported to be expensive, so are likely to mainly be applicable to medium and large-size businesses.

"Amazon still only has a small market share as a portion of the total retail sector locally and the impact is uncertain in Australia due to Amazon’s recent entry and relatively limited traction with shoppers and local vendors to date."

In Australia, Amazon started well with a high anticipation among shoppers, and a level of anxiety from mainstream bricks and mortar retailers already suffering from low consumer confidence and a general shift to online buying.

But the big bang for Amazon at the start of its launch in Australia didn't eventuate.

“They had a very slow pace in the market, but they set up things to start gaining the traffic, the audience," says Tracey Weinrib, a Data, Digital, Technology and Programmatic expert.

It's going to take time to match LinkedIn with 10 million active users in Australia, she says.

Finding consumers before they know what they want.
Jason White, SVP & GM Programmatic at CBS in the US, suspects Amazon is going to get better than Google or Facebook.

He describes Amazon as finding consumers before they know that they want.

"When we think of a product you go to Amazon to search for it before you go to Google," he says.

Asked how he would, if he was Amazon, go after Google in Australia, he replied: “To kill a bear I would go directly for the heart.”

Target the telecos and the consumer electronics space where Google is strong, he says.

“I would go deep and I would just take all of those budgets and then start looking another categories," he says.

“I think they (Amazon) go directly to the advertiser because they think they can provide their own agency and ... do it better.

“That's why they bought the Washington Post. They got into journalism. They looked at that model and said: How can I make it smarter, make it better?

“And I think that they do have direct relationships with advertisers today from advertisers marketing on the website.”