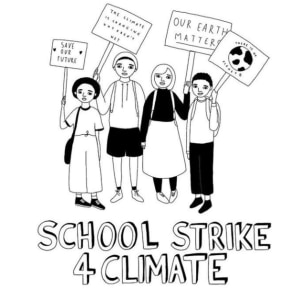 Advertising agencies are supporting this Friday’s climate strikes, with some giving staff time off to attend.

The strikes are taking place in more than 120 countries around the globe, including in Australia, on 20 September, three days ahead of the United Nations climate summit in New York.

Prime Minister Scott Morrison will be in the US at the time but reportedly won’t be attending the summit.

The strikes were initially started by school students who marched to demand action around climate change, such as no new coal and oil projects.

In Australia the strikes are taking place in big cities, such as Melbourne and Sydney, and smaller regions, such as Orange.

Special Group, Havas, DDB Sydney, Young Folks Digital and Odette and Co are among the agencies backing staff taking part in the strikes.

“We know climate change and the environment is something that affects us all,” Lollback says.

“Having passionate people is what makes our agencies great and I know many of our people feel passionately about this. Which is why, if our people in Australia and New Zealand decide to support the rally on Friday, myself and the CEOs of Mindshare, MediaCom and Wavemaker and Essence fully support that.”

The Royals are also encouraging all staff to attend the strikes across Melbourne and Sydney, without it affecting their personal leave.

Dave Hartmann, strategy partner at Special Group, has been championing the issue at the agency which has given staff whatever time they need to be part of the marches.

“Realistically, it’s a pretty small gesture, for what is such a big issue,” Hartmann told AdNews.

“As much as we’d like to think that what we do in our industry is important, it’s never going to be more important than the planet. And it would be wrong to not give people the opportunity to show their support for it.”

Odette Barry, founder of marketing firm Odette and Co, is also giving her staff half the day off to attend.

Barry also organises free PR for the students leading the strike at Byron Bay High School, a group known as the Byron Shire Youth for Climate Change. This support includes “light touch” media training, such as how to speak to media and assistance with pitching their stories to local media outlets.

“They’re superstars and inspiring,” Barry says about the students. “It’s really rewarding to have a skill that you can donate to practical advantage in these sort of environmental issues.

“The kids really don’t need me, they’re so clued in and clever, they just don’t know how to navigate the media landscape.

“It’s great to be able to assist as a conduit so that they can be heard by more people and hopefully see some action from the decision-makers.”

Barry says that while most of her business friends are support the strikes, the cost of shutting operation to attend is sometimes too high.

Erin Morris, founder of Young Folks Digital, a Melbourne marketing agency for “conscious companies”, is another small business throwing its support behind the action by closing its doors to attend the march in the Melbourne town of Mornington.

“As marketers and communicators, we know what we do can turn an idea into an empire,” Morris says.

“But we've also seen the role marketing and communications plays in the consumerism machine. We believe that business can be a force for good, so we’re closing our doors on Friday to support our staff in attending the global climate strike and championing the local rally in Mornington.”

Barry acknowledges larger agencies don’t always have the flexibility to support the strikes.

“That said, large agencies that lead these conversations and permit staff to attend have a great opportunity to be seen in a better light, improve culture and to educate their clients and staff at the same time,” she says.

“We need to create change with kindness and compassion and I’d wager most clients will understand and champion the ask when we gently request that they understand why we can’t meet deadlines because the environment needs our urgent attention."