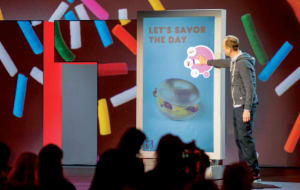 The Adobe Summit shows the cloud continues to billow due to the digital weather front spreading across the globe, Pippa Chambers reports.

If you are a marketer just catching up to the fast-spinning, all-consuming weather front that is digital transformation, then no doubt the billowing marketing cloud is either being harnessed or surely on the agenda, right? AdNews went to Las Vegas to find out.

“We are now on the cusp of a tectonic enterprise shift where enterprises will be forced to transform in ways they haven’t had to in decades.” That was Adobe GM and EVP Brad Rencher’s observation on the state of play for marketers and technology firms at this year’s Adobe Summit in Nevada.

Each year Adobe hosts the largest digital marketing conference in the world which more than 10,000 people attend. It’s all about the cloud. Specifically, Adobe’s Marketing Cloud, which raked in US$1.36 billion in revenue last year. Rencher went on to outline what getting on top of this transformation looks like when it’s done right.

“It’s about doing our jobs so well that the consumers don’t even know that you [marketers] and I exist because we are closing the gap between people and the things they want to do and the people they want to be with,” he said.

The digital giant outlined a handful of new tools and initiatives that point in that direction, and clients including McDonald’s, PepsiCo, Samsung, General Motors and Macy’s talked on subjects as broad as Mattel losing its way, McDonald’s digital transformation and George Clooney’s dislike of Twitter. In Vegas, Adobe launched a cross-device co-operative aimed at transforming today’s device- and cookie-based marketing approach into true, people-based marketing. It revealed a partnership with analytics firm Comscore to advance digital TV and ad measurement and launched updates set to create a standard for measuring all digital content across platforms to allow advertisers to move more TV advertising dollars online.

Adobe research analyst Scott Denne said: “Without first knowing the links among devices, marketers will come up short in their attempts to understand their customers and measure the reach and impact of campaigns.”

The Adobe Marketing Cloud Device Co-op aims to tackle that. Adobe and Comscore’s collaboration looks at key metrics on the number of video starts, average time spent watching, and rate of ad engagement in order to optimise ad campaigns and more efficiently reach the right audiences across TV and digital.

News of the Comscore tie-up follows hot on the heels of Viacom’s deal with the analytics company in March. The move allows Viacom to use Comscore data to power its suite of targeted advertising products. In the face of plummeting TV ratings it’s no surprise media companies are wanting to bolster their data targeting services to woo advertisers. 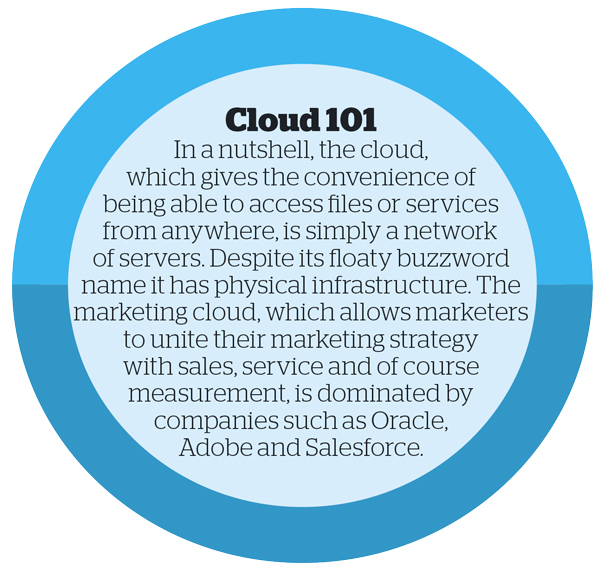 Operational silos and disjointed integrations are still a significant barrier to successfully using data and insights to deliver improved customer experience and Paul Robson, Adobe president for Asia Pacific, was quick to emphasise the importance of creativity too.

For some, Adobe still may mean Photoshop, Flash and PDF, but Robson emphasised this has transformed over the last six years to technology that would “unlock the CMO and provide marketing teams with a set of tools that would make their job more effective and impactful in a digital world”. He said Adobe has undergone “an incredible transformation” since 2000, shifting its business to the cloud and creating new categories of digital marketing and document services.

It’s a competitive space, with Salesforce, Oracle and, more recently, Google all elbowing for room to offer the most integrated platform that can give advertisers the all important “single customer view”.

However, Robson isn’t concerned about Google’s latest moves into the territory and claims Adobe’s platform is the only one that creates a comprehensive and actionable view of an individual customer.

“The pace of change has been frenetic and awareness of our platforms is increasing. It’s good to see Google making some first commitments to a marketing platform; more competition in the space is great. We see Google’s announcement as a validation for our own vision,” he said.

Robson heads up Adobe’s business across the Asia Pacific region, leading the local MDs in Australia and New Zealand, South East Asia, India, China and South Korea. He revealed that much of his time is spent on strategy and business development, working with teams on how the company can best take advantage of the opportunities in such a dynamic region.

Looking at Adobe’s Asia Pacific region, Robson said the Australia and New Zealand business is often used as a test market for new innovation, with the transformation to a Creative Cloud subscription model first being trialled here and across the ditch before being rolled out globally.

“With regards to the Marketing Cloud we have several customers in the Australian market that are breaking new ground in areas such as data and how they are using Adobe Audience Manager [our DMP] to create world’s best practice in personalised digital marketing,” he said.

There isn’t an industry anywhere in APAC that is immune from digital disruption and more than 270 marketing leaders attended the summit from the APAC region from companies such as Tourism Australia, HCF and Xero.

“There has never been a better time to be working in high tech in the APAC region.

Mobile is exploding, businesses around the region and the world are transforming to take advantage of digital innovation and Adobe is at the forefront of this revolution,” Robson said.

Tourism Australia - 'We were tech dead'

Speaking to AdNews at the US event, head of digital at Tourism Australia (TA) John Mackenney, said TA’s move from using legacy systems to Adobe modernised its marketing department and offered a saving of $700,000 in the first year.

The company, which sees 15 million unique visitors a year to its online properties, now considers itself an advanced user of the tech stack, influencing its analytics tools and more. It has enabled the tourism body to complete a data sharing deal with Virgin Australia that will help it create more personalised user experiences across its tech platforms.

“We had a whole raft of quite expensive legacy technology in place, and different tech too, across our sites. At one point we had up to 32 microsites so our message was fragmented,” Mackenney said.

“We had quite a large infrastructure burden – I suppose we were tech dead. What Adobe allowed us to do was to bring us onto a modern platform and it also helped us deal with getting rid of the legacy systems and technology.”

He said having such workplace efficiencies in situ and a proper digital asset management system in place sees it now sitting as a modern marketing organisation – leaving behind hard drives in favour of automation.

The move to Adobe allowed TA to showcase immersive 360 video on its website, which has since seen “phenomenal” engagement results – up 65%, Mackenney revealed. It has also driven an extra 77% in leads off to the Australia industry since it launched the campaign in January.

AdNews went to Las Vegas as a guest of Adobe.