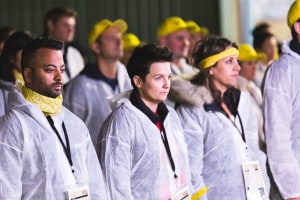 The advertising industry has raised more than $165,00 for underprivileged youth at UnLtd’s annual Bail Out.

More than 100 adland leaders from the creative, media and tech sides spent a night sleeping at a former Juvenile Detention Centre in Haberfield to experience what life is like for young people at risk.

As part of their stay, the “inmates” were lined-up, interrogated, fingerprinted and stripped of their possessions before being locked into their cells.

They also took part in a series of workshops to educate them on the realities and difficulties many Australian youths face.

Each inmate was required to raise their “bail” money, a minimum of $1000, to leave the centre, with all funds raised going to UnLtd’s charity partner Whitelion.

“The Adland Bail Out experience was thought-provoking, confronting and transformative,” Claire Salvetti, CEO of One Green Bean says.

“By putting myself briefly in the shoes of a young person in detention, I experienced a profound sense of loss of autonomy, competence and connectedness to society. I was astonished at the dramatic change in my sense of well-being. If I, a self-assured adult, had this reaction to temporary incarceration, then the impact of long-lasting damage to children who spend years in this system is unthinkable.”

The biggest fundraisers of the day were Paul Sigaloff from Verizon Media, Kristiaan Kroon from OMG and Virginia Hyland from Hyland.

On the day, the first industry-wide campaign, Invest in Me, created by pro-bono by Ogilvy, was revealed. The campaign aims to raise awareness and funds for Whitelion and change the perception of at-risk youths.

“For over ten years, UnLtd has been bringing the media, marketing and creative industry together to do good,” Chris Freel, UnLtd CEO, says.

“This campaign is the culmination of that work and a perfect example of our power to make a positive difference as an industry. Not only has the Adland Bail Out event brought the industry together and raised some serious cash, it’s shown the wider impact we can have when we work together.”

The campaign launches 16 June across TV, radio, digital and out of home. So far, 30 companies have pledged their support for the campaign, with more than $1.5 million of media inventory already committed.

The Melbourne Bail Out runs on the 24 May.