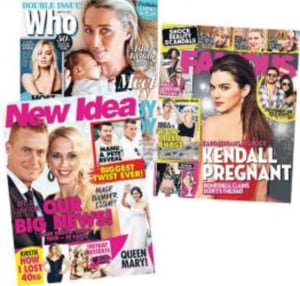 The figures for the period ending in March 2016, focused on weekly magazines and revealed that NW's print sales fell 24.6% year-on-year, with its circulation dipping to 52,786. NW's digital sales also dropped 18%.

Of the 10 titles audited, all experienced losses with OK! magazine recording the biggest circulation drop of 27.9% YOY.

Pacific Magazines' Who title experienced a sales drop of 10.8% in print, with New Idea also reporting a 14% loss.

PacMags CEO Peter Zavecz tells AdNews that while he doesn’t ignore print circulation, the ABC figures are “only one metric”.

“It’s easy to get carried away by the one metric, but the print metric is not necessarily the most meaningful," he says.

“On its own, [the ABC figures] are outdated. When it’s combined with our other audience metrics such as readership, online audience and [social] followers, it’s a very different number.”

Bauer Media is another publisher that looks elsewhere to get a more accurate assessment of readership, becoming the first publisher in Australia to fully implement Roy Morgan’s new enhanced cross-device and cross platform audience data.

This is not the first time publishers have turned to other metrics. Publishers have previously said they would turn to metrics that better reflect total audience figures, such as the Magazine Publishers Australia 360 report.