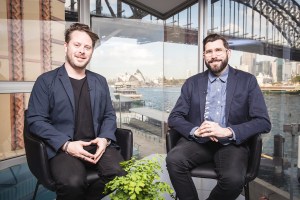 When creatives Matt Burton and Dave Bowman jumped from Special Group to Google last year, not many were surprised the creative duo, better known as Matty and Dave, had ambitions outside traditional agency workings.

However, questions remained about what their roles would be at Google Zoo; what actually is the creative unit within Google? What type of work does Google Zoo do? Would they be creating ads for clients?

Google Zoo in Asia Pacific is a team of 20 people working across 19 countries. The team consists of creatives, technologists, business partners, producers and strategists. Depending on the challenge, Zoo creates bespoke teams to work on a solution for Google partners, which is never a 30-second ad, explains Burton.

“We’re not an advertising agency first of all. What we do is partner with Google’s most valuable and strategic partners across APAC and help them leverage Google technology in a way that hasn’t been done before,” he says, adding projects range from building apps to creating new technologies.

Google Zoo works with brands and tech partners directly, but they also want to collaborate more with agencies to help them create a journey across platforms like YouTube. Burton gave the example of CHE Proximity’s Billion Dollar Giveaway as an idea that effectively told a story using pre-roll targeting.

“We’ll play with anyone that wants to play with us. CHE created that technology on their own, so they’re already experimenting with this type of technology and they’re probably a richer creative agency for it. For other agencies, we’ve got new tools and we know how to wield them to help them on this journey,” Burton says.

On arrival, the pair realised Google was having a lot of conversations with external partners, but was largely ignoring creative agencies.

“Creative agencies weren’t necessarily getting the same level of access to conversations with Google and we knew we could change that,” Bowman says.

Having worked at some of the world’s most prominent agencies in their careers, including TBWA, Saatchi & Saatchi and Droga5, Bowman and Burton have earned more than 40 Cannes Lion.

Burton explains that in their previous roles, the duo largely relied on their gut to steer them towards a great idea. At Google Zoo, they now have the data, insights and technology to deliver the creative ideas fuelled by technology.

“Back in the day you could hang out at the pub to understand the cadence of what people were talking about. Now, these conversations happen online so if you can understand that, you can use it in clever ways. We don’t run away from data. We take risks, but they’re calculated now,” he says.

In their 18 months at Google Zoo, one of the concepts that have been developed by the Google Zoo team is the Shiseido Tokyo Braille nails. Braille nails were the first project of an ongoing collaboration between Google and Shiseido to explore ways technology and cosmetics can enhance the lives of the visually impaired.

Another example of Google Zoo's work is the Nike Hyper Court app, created in partnership with Nike and Google, which unlocks basketball training-related content for free and without the need for data. The Google technology was developed specifically developed for the Philippines, eliminating the need for high speed data connectivity so youths in Manila looking to play can stream YouTube content on courts across the city.

These projects wouldn’t have been possible within an ad agency, Bowman explains, where they were often told their ideas were too far-fetched. Now, with the resources of Google, they’re making the ideas that were once deemed impossible.

As for what they miss about agency life, Bowman says there’s an energy with creative agencies that doesn’t seem to exist elsewhere.

“I don’t know if I always miss it, but there’s one thing I definitely noticed since starting here and that’s there is an energy within agencies and it’s probably because people are time poor and under pressure, but it’s an infectious energy that pulses through the entire agency,” he says.

“There’s a shared spirit in getting something great out the door. It still happens within Google but not everyone here is under the same pressure that agencies face on a daily level.”