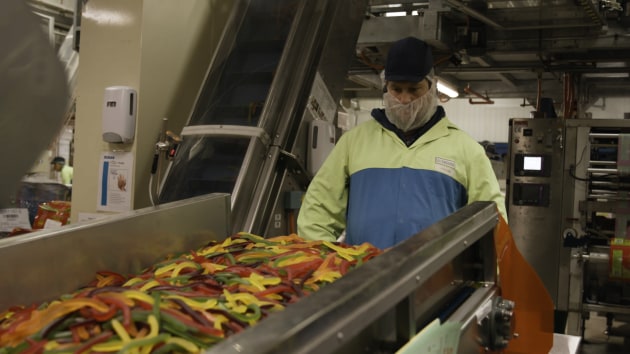 Want to know why Allen's snakes are called 'snakes alive'? Goscy has you covered in this video for Vice.

Local comedian Aaron 'Gocsy' Gocs stars in a new Vice short-form series to find unsung heroes that make Australia what it is.

In this video, Goscy travels to the Allen’s Lolly factory in Broadford, Victoria, to see what it takes to make Australia’s most iconic sweets.

The video captures the heroes Allen’s snakes “alive”, who is responsible for squeezing out 27,000kgs of the floppy sugar sticks.

During the slightly socially awkward video, we learn that snakes need to be stretchy before they go out to market and that it’s called 'snakes alive' because if you squish a bunch of them then they will unfold, as if they were alive.

Goscy tries to convince the factory they are missing a trick by not having a sausage roll flavoured snake.

Not a great deal happens after Goscy’s rejection, but at least he gets to meet salt sugar of the earth folks.

The new campaign was created by The Core Agency.