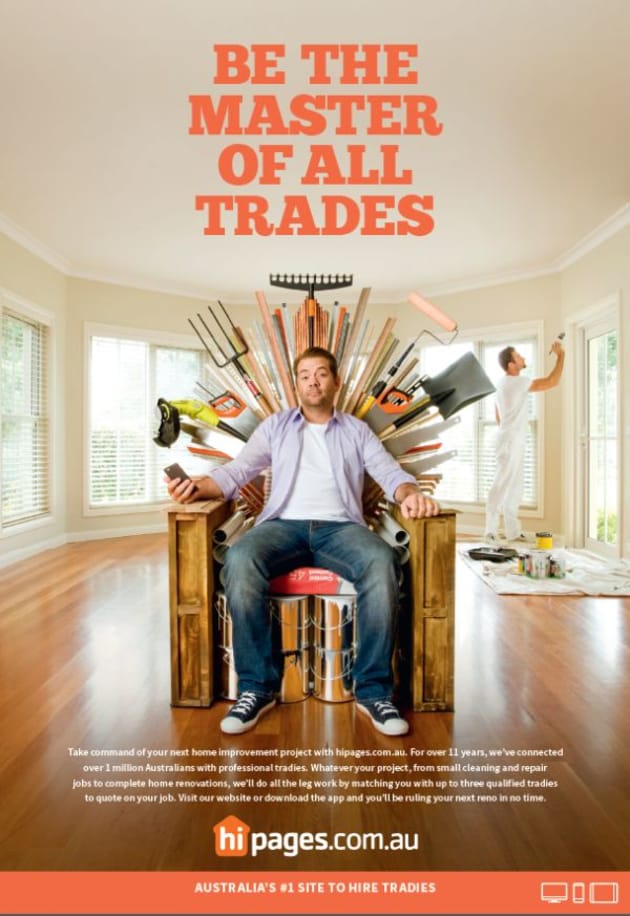 Hipages launches its first ever brand campaign in a large-scale national push developed and executed by Ikon Group Sydney.

The ‘Master of All Trades’ campaign aims to introduce homeowners to the Hipages service which offers access to trades across Australia.

The campaign includes press executions in national and community papers, radio, digital and OOH which will launch in February, with magazine and TV executions to be seen in following months.

The campaign images show a man and a woman sitting on a throne which pays homage to Game of Thrones, but the royal chair is constructed of tools including saws, spades, paint rollers and rakes.

Ikon Group Sydney’s managing partner Pat Crowley says the spot was designed to introduce the service to homeowners shows the use of various outlets.

“The result is not only a creative campaign that will grab the attention of homeowners keen to find reliable trades, but one that will be rolled out on a large-scale crossing multiple channels across the country," Crowley says.

The Daily Telegraph, Herald Sun, The Courier Mail, The Advertiser, The Australian, and The Sunday Times will carry the print execution from this week as part of a partnership with News Corp Australia. Radio and digital also go live this week, and magazine titles such as Inside Out, Country Living, and Vogue Style will carry the campaign from March. OOH launches in February and TV in April.