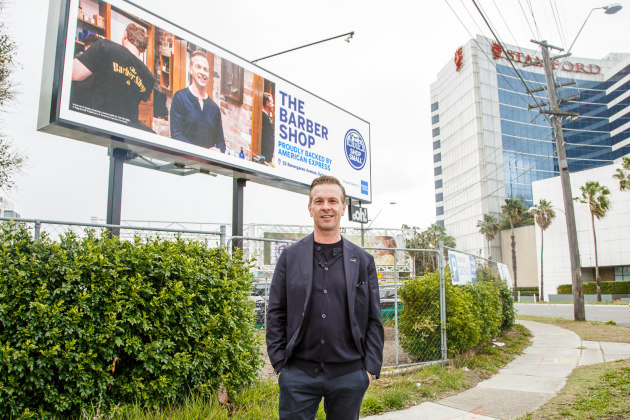 Running throughout the month of November, the campaign features 15 business owners from across Sydney and Melbourne who are encouraging consumers to “love where you live”.

Three of the featured small businesses have been surprised with ads displayed in some of the largest out of home placements in Australia. This includes Grand Days from Woolloomooloo and the Barber shop from Barangaroo, who were featured on screens on O’Riordan Street in Mascot.

After six years of running, the Shop Small campaign has gained support from government, associations and ambassadors.

Inspired by the brand’s global brand platform, the spot uses a hand-drawn version of American Express’ famous card design which places merchants at its centre.

American Express VP of brand Naysla Edwards says: "Small businesses are an integral part of our communities and what makes them unique. What better way to recognise their contribution and celebrate them, than by putting them front and centre of the Shop Small advertising campaign."

Edwards also comments on the importance of supporting our local businesses and watching them thrive.

Mindshare is executing the paid media campaign and PR agency opr handled earned media strategy, which includes the launch of a whitepaper report, The Economy of Shopping Small: Back Your Backyard, and an Instagram competition asking consumers to nominate their favourite small business using the hashtag #ShopSmallFave.

Bundaberg Rum kicks off State of Origin with Jimmy Brings

NRL legends, Fletch and Hindy, will be putting on their boots again, to deliver Jimmy Brings orders to lucky unsuspecting fans in Sydney.