Countdown of Awesome: Miss Skinny and the Smoking experiment

It's Countdown of Awesome time again from your good friends at UM, Tom DiSapia and Robert Bellamy. This week we are dealing with the big issues: self-esteem, body image, bullying and domestic abuse.

A.S. specialise in a wide range of colours but found 83% of sales were for black, white or grey. They created a clever machine that boosted the confidence of shoppers to try new colours. Might be a one off but definitely a smart use of tech that has the brand USP at its core.
@disapia

Bullying is an issue many people face, but few talk about openly. To highlight that talking about bullying can help wipe it out and stop victims suffering, a Singaporean anti-bullying organisation released a video that gets shorter every time it’s shared.
@davinafaifer

3. When not to use force

This clever DPS is stuck together requiring the reader to use force to pull it apart. It’s simple but very impactful. “If you have to use force, it’s rape”
@robertbellamy 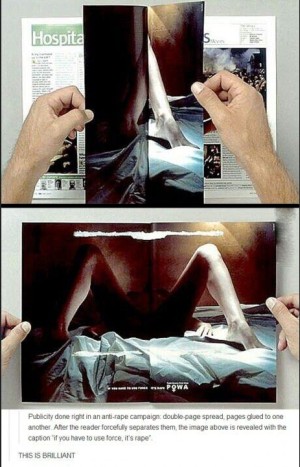 Most people are against the unrealistic representation of body image in the fashion industry, yet still evaluate themselves against it. To get people to vocalise the absurdity of this, Healthy and Free set up a store that only sold size zero clothing – which generated a massive uproar on social media and fashion blogs.
@toph_colter

For some smoking is still perceived as cool and attractive. To dispel this myth an experiment on Tinder proved that smoking reduces attractiveness by half. Very smart use of a new platform that validates its results by asking real people in a real life scenario. Brilliant.
@robertbellamy


If you have seen something that should have made the countdown this week let Tom and Roboert know and become a contributor! @disapia and @robertbellamy