Bauer Media drives female future for 2019 with slate of initiatives 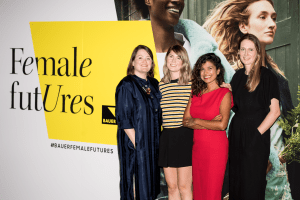 Bauer Media has unveiled a forward-thinking and strategic collection of initiatives designed to support Australian women, as part of a new ‘Female Futures’ strategy.

Female Futures was yesterday launched at a breakfast event in Sydney where the major publishing house revealed a commitment to a re-energised and positive narrative around women in the workforce, helping to close the gender pay gap and driving better brand communication with the female population.

Encompassing a new division, a new digital cross-brand content initiative and a show of strength to drive equality across its editorial offering, the publisher has promised to write 10 million words across its portfolio - The Australian Women’s Weekly, Cosmopolitan, Elle, Harper’s BAZAAR, Woman’s Day, NW, OK!, Real Living, Now to Love and Australian House and Garden - to demonstrate its reinforced commitment to issues that matter to women.

The launch centred on a ‘Female Futures’ trends forecast. Created with The Future Laboratory UK and presented by its foresight director, Ruth Marshall-Johnson, the report discussed changes in gender relations, closing the pay gender gap and looked at how brands should communicate with women who are playing a more prominent role in businesses.

This was then followed by a panel discussion with Marshall-Johnson, Sunita Gloster, newly-arrived director at PwC’s CMO Advisory Practice and Ally Watson, CEO of Code Like a Girl, who discussed tackling unconscious bias and succeeding in male dominated fields.

Watson and Gloster reflected on their own careers in tech and advertising respectively, noting they had often been the minority in the workplace.

“It’s hard to be confident when you have so little in common with your male counterparts,” Watson said.

"I’m not a gamer. I don’t like beer and I didn’t watch the Super Bowl last week. So to find those common bonds, which are so important, is so much harder for women in technology.”

Gloster called for the marketers in the room to begin driving change. “Reshaping stereotypes and changing norms is incumbent on all of us in this industry – in every industry. But particularly with marketers, who shape society with the content we make,” she said.

Bauer Australia CEO Paul Dykzeul, who attended the launch, revealed that the range of initiatives also includes the creation of pop-up magazines and pop-up digital spaces that are intended to meet the market’s growing demands for cross-platform solutions.

“We are not just talk. Each and every one of our brands have committed to campaigns and content that will continue to help create a better female future,” he said.

“As the CEO of an amazing company I have to say, I don’t underestimate my power to ignite and change things. The more engaged and moved our audiences are, the greater the benefit will be not only for our company but also for you, our commercial partners,” he added.

Dykzeul and commercial director Paul Gardiner also unveiled a new digital destination entitled ‘Women to Love’, a network-wide content initiative that will elevate women in the arts and celebrate the importance of creativity and the women who “move the needle”.

Commercial director Paul Gardiner told advertisers Story54 is a “insight-led, brand entertainment, storytelling for women, by women”. It will be led by general manager Jane Waterhouse.