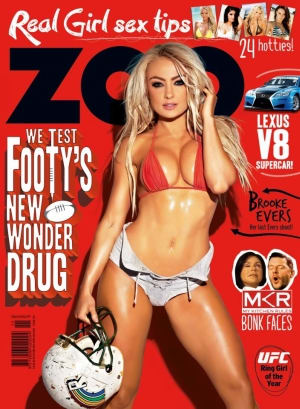 Zoo Weekly has rubbished suggestions that its removal of user-generated comments had anything to do with the ad watchdog. The lads mag told AdNews it did so on its own initiative because some reader-generated content was "damaging the brand".

The Advertising Standards Bureau (ASB) rapped the Bauer-owned men's magazine late last year over content on its Facebook page which it believed had breached several codes about discriminatory and sexist content.

The title had posted several pictures of scantily-clad women in groups and asked fans to comment with which one they would pick and why. It also asked fans to pick the top or bottom half of a woman and explain their choice. The watchdog received complaints that the content Zoo had posted and the user-generated comments were "degrading and dehumanising" towards women.

At the time, Zoo denied the content was offensive and refused to comply with the watchdog's ruling. It argued fans were familiar with the content and it was reason why readers followed the title on social media. It also claimed the content should not be of concern for the ASB as it wasn't classified as advertising but editorial.

However, the watchdog told AdNews yesterday the magazine had eventually bowed under pressure and "agreed to abide by the determination". It said the content in question had been removed.

But Zoo has said the watchdog had nothing to do with its removal of content. Publisher Brendon Hill said it culled user-generated comments because they were "damaging the brand". He said: "We have started monitoring comments to protect the brand. The comments weren't the thoughts of Zoo, it's not what we stand for."

He argued that while Zoo's newly-adopted comment moderation had "hurt its engagement levels on Facebook", brand health was more important. Hill also stood strong in his opinion that its Facebook page was not advertising, and there not under the watchdog's jurisdiction.

While Zoo continues to post pictures of women and ask fans to pick a favourite, Hill said its editorial strategy was "always evolving and was very respectful of women". "We celebrate them," he said. "There is a very humorous side to the brand".

The ad watchdog was unavailable for comment at the time of writing.