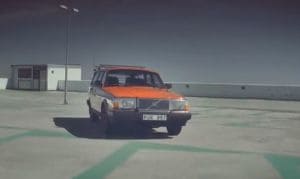 Volvo Australia's return to the V8 Supercar series has helped drive a sales increase of the S60 sedan by 62%.

The Swedish automaker uses a modified S60 in the V8 Supercar series and Volvo Australia credits the success of its standard equivalent to the multichannel campaign that ran across billboards, TV and online.

The ad, a high octane blast around the track highlighting the track version's credentials and the pedigree of its street equivalent, has been heavily promoted on TV. It has high production values and everything you want from a sporty car ad, fast cornering, slow motion shots, splashes through puddles and a reflected glimpse of the car as it overtakes a chrome tanker.

The Volvo Australia Youtube channel shows it has racked up around a thousand views at its official home.

But that is dwarfed by another Volvo campaign from the carmaker's country of origin, which is slightly less sporty.

Swedish art director Christoffer Castor is attempting to sell his 1993 245GL. He describes the motor as “Sprung from engineering hands of wizards from a bygone era,” as the video, complete with rumbling classic advertising voiceover, highlights the car's  features such as "four wheels, door handles, an inside and an outside". It has attracted over 500,000 hits.

Digiday has reported that Castor's car remains unsold however his car is now somewhat of a celebrity. After the video went viral he was pulled over by two police officers simply because they recognised the car from the video and asked to take a photo of it.

Maybe viral videos don't translate into sales after all. But see the two for yourself and decide which car you'd rather buy.