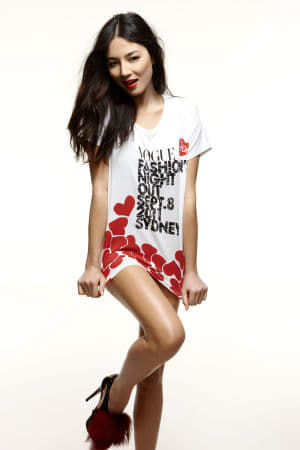 Thousands of wide-eyed eager shoppers flocked to Westfield Sydney last night for a retail extravaganza – but could all shops keep up with the demand?

More than 600 retailers pulled out the stops to offer customers special offers or a glass of bubbly as part of Vogue Fashion's Night Out (VFNO) in an attempt to boost retail trade.

Queues formed outside many shops and some sales assistants even resorted to stripping down mannequins to give customers what they were after.

Unfortunately for new store Zara, which was packed with customers, at about 8pm it began running into problems.

The Eftpos could finally take no more and just two and a half hours into the retail frenzy, those without cash had to abandon their items and head to the ATM.

One staff member said the machines had been used so much they just packed in and they were not sure if they could get them going again until the next day.

Despite the onset of rain the free event, which was open to all members of the public, appeared to be a success with most people rushing about with bags in one hand and a free cupcake or candyfloss in the other.

This was the second year of VFNO and the event, which featured DJ Ruby Rose, saw customers treated to various free samples, lucky dip discounts and of course, the extended shopping hours.