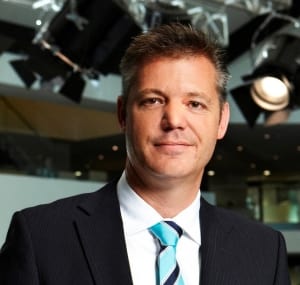 James Warburton will act as V8 Supercars CEO from 1 June 2013.

V8 Supercars has confirmed Ten boss James Warburton as its new chief executive. The firm had long been rumoured to be in talks with the former Ten chief but tried to quash stories as "unsourced speculation".

Warburton will takeover as CEO from 1 June 2013. The news was announced via the V8 Supercars website.

The move was first tipped in an article in the The Australian Financial Review which claimed Warburton was being pursued by V8 Supercars' majority owner, Archer Capital, to take over from current chief executive David Malone. Archer was after Warburton due to his free-to-air television experience, the report claimed.

Warburton was sacked by Network Ten in February earlier this year after a tumultuous year in the job. His rein was plagued was a host of failed programs and a declining share of the TV ad market. He was replaced by News Corporation executive Hamish McLennan.

V8 Supercars director Andrew Gray said: “James is an ideal fit for this role given his extensive track record in the television, sales and commercial fields; as well as his strong knowledge of the sport. He is incredibly well credentialed and enjoys support from a wide cross section of business leaders as the right person for the role.”

Warburton added: “It is a great honour to be leading this sport into its next phase of growth. As a life-long fan of the Championship I've never seen better on track action than the start to the 2013 season and the teams and the sport should be congratulated for the seamless and professional roll out of the car of the future. I can’t wait to rip in.”