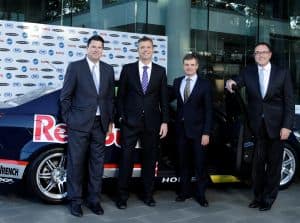 V8 Supercars has signed a $241 million six-year deal with Foxtel, Fox Sports and Ten Network for all media rights, including digital.

The agreement was struck by chief executive James Warburton with former employer Ten, which had sacked him in February.

It also meant walking away from a deal from former employer Seven, which sued him when he defected to Ten. Seven said it had put forward an offer with a “substantial increase” on the current agreement.

“This is a tremendous and significant deal for our sport,” Warburton said. “It is a great boost to our amazing race teams and fans and will lead to unprecedented coverage on multiple platforms for our sport, never before seen on such a scale.”

The partnership is a scoop for Ten, which has been trying to add more mainstream sports to its network to boost its ratings and audience share.

Ten chief executive Hamish McLennan said: “V8 Supercars is an iconic Australian sport, reaching into every part of the country, and James Warburton and his team have big plans to make it even stronger and better.

“Today's announcement is in line with our strategy of investing in premium live sport and adding more event TV to Ten.”

Foxtel chief executive Richard Freudenstein said: “This relationship will significantly strengthen our sports offering and give yet another reason to subscribe to Foxtel.”

Foxtel will make the sport available on its TV broadcast platform in HD as well as Foxtel Go and Foxtel Play.

Seven West Media chief executive Tim Worner said: “We put forward an offer for a new TV rights agreement that represented a substantial increase on the current rights agreement and one which made financial sense for Seven and V8x and would have ensured its presence on Australia's leading TV network for years to come.

“V8 Supercars declined to build on this relationship beyond 2014. However, we look forward to broadcasting V8s next year, the final year of our agreement and leaving the sport in good shape.”

Warburton thanked Seven for its commitment to the sport over the years.