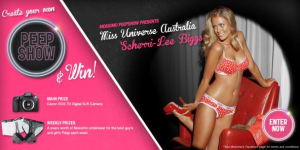 A Mossimo campaign featuring Miss Universe Australia Scherri-Lee Biggs has been lambasted as “sexist”, after being accused of glorifying peeping toms.

The in-store and Facebook campaign for the clothing brand has asked people to submit peepshow-style photos, which will be judged by Biggs.

The Advertising Standards Bureau has received a number of complaints, and is currently reviewing the campaign.

Much of the anger surrounding the campaign has been directed by lobby group Collective Shout. An article on the Collective Shout website said, “What Mossimo doesn’t seem to understand is that what they’re promoting as a bit of sexy fun, is actually a crime.

“There are countless examples of women being ‘peeped’ at and filmed without their knowledge and we have heard of the pain and trauma suffered by these women.”

One person who made an entry on Mossimo's Facebook competition page took a picture of herself holding a sign which said “Mossimo Peepshow = sexist rubbish”.

Mossimo was unavailable for comment at the time of writing.