Retailers wage war on Woolies and Coles but progress 'glacial' 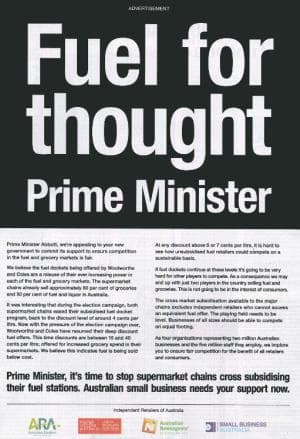 Independent Retailers of Australia has rolled out full page ads urging Prime Minister Tony Abbott to rein in the stranglehold of Coles and Woolworths. But experts have questioned the effectiveness of such a move and the big business lobby has rubbished any suggestion of a competition issue.

The lobby group, which represents the interests of the Australian Retailers Association and other retail groups has launched full page ads in the Australian Financial Review, The Australian and The Age this morning. The ads take aim at the significant fuel discounts Coles and Woolworths have been touting – up to 40 cents off per litre – and urges the new government to generate stricter competition laws which stifle the supermarket chains' “cross market subsidisation”.

Australian Retailers Association executive director Russell Zimmerman told AdNews: “We ran a campaign before the election pushing for action, but there was no traction, so now the election is over, we are asking for a root and branch review of Australian competition laws.

“We are asking for greater powers for the ACCC, because it is clear that Woolworths and Coles are able to cross subsidise,” Zimmerman said. “Their supermarkets are subsidising their fuel prices. How can small businesses compete?”

The lobby group has only placed newspaper ads, but Zimmerman said if the government does not pay attention, then the group will consider ramping up its activity. He also said he would “not rule out” an advertising push looking at the major chains' increasing grip on the alcohol market, but said “we are focusing on fuel at the moment”.

A number of industry experts have expressed doubt as to whether such a push will have any impact.

One media agency senior said it would not have the supermarkets quaking in their boots.

“These lobby groups spend lots of money on print, but it's questionable how effective this will really be. The government doesn't like to bow to pressure from these groups, and I wouldn't think Coles and Woolworths would be paying any attention.”

The dominance of Coles and Woolworths was unlikely to to subside, he said, but campaigns from the likes of the Independent Retailers of Australia might “chip away at the duopoly”. However, he said that any progress would be “glacial”.

The change in government may also favour big business, he suggested.

“We have seen an increased focus from the ACCC on this shopper docket issue and in other areas, so there have been some moves. But it's fair to say that a Liberal Government will be more business friendly, so any headway might slow. Something has to give eventually, but it will be a glacial battle, and any point of progress will be incremental.”

The Korn Group social researcher Neer Korn told AdNews that the full page newspaper ads also reflect consumer sentiment. “But consumer attitude is not reflected in consumer behaviour. Consumers are unhappy with the duopoly, but ultimately they are doing nothing about it.”

When asked for comment, Woolworths directed AdNews to the Australian National Retailers Association (ANRA), while Coles had not responded to requests for comment at the time of writing.

ANRA CEO Margy Osmond said in a statement: "The independent petrol sector has tripled in size over the last 10 years. It’s a competitive market and that competition is good for consumers. There is no evidence that competition in the fuel market is decreasing due to the growth in the market share of independent retailers.

“Shopper dockets schemes have been around for more than 17 years and have the approval of the ACCC and a range of retailers, including IGA stores, offer them as recognition of customer loyalty.

“Fuel retailing continues to be a very competitive market, and this competition is continuing to drive lower prices for the Australian community.”

Meanwhile, the supermarket chains have been in talks with suppliers about implementing a voluntary code of conduct to curb any unconscionable conduct from the big players in their negotiations with suppliers. A similar code of conduct is also on the cards between the supermarkets and winemakers, but a story in The Australian today has suggested any such code would have little impact on the dominance of Coles and Woolworths. There have been suggestions that only a mandatory code, enforced by the ACCC, could have any genuine impact.