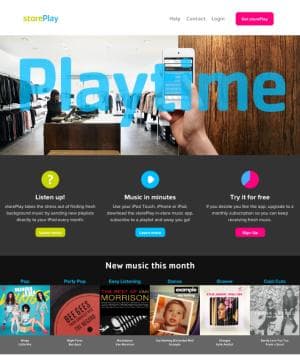 A new app called StorePlay will allow retailers to subscribe to an in-store music service.

Marketing Melodies and digital agency WeAreDigital has unveiled an app which allows retailers to subscribe to an in-store music service called StorePlay.

StorePlay represents an evolution in how digital agencies are developing utility-based platforms for clients rather than just one-burst campaigns.

StorePlay was officially launched last night in Melbourne after a trial period. The app counts among its initial clients Palace Cinemas, Karen Millen, Ladro Pizzeria and The Italian Restaurant.

Retailers pay a monthly subscriptions fee, available across different pricing levels, which allows them to download musical content based playlists. StorePlay is purportedly the first app of its kind globally.

StorePlay has licensing deals with major and independent labels including EMI, Sony, Warner and Universal. The app is compatible with iPhone, iPad, iPad Mini and iPod Touch.

Marketing Melodies founder Dean Cherny said: “StorePlay was an idea that I had about four years ago and it is incredible to see it finally come to life. I have been in the retail music business for 25 years, and the feedback I've received from my clients has allowed me to create what I believe to the ultimate music service for businesses.”

WeAreDigital founder Karson Stimson said: “This project truly integrates digital into the physical bricks and mortar space and works with the retailers to provide a more time and cost efficient way of bringing music to the in-store environment.”

Retailers will still need to pay yearly licence fees to the Australian Performing Right Association (APRA) but depending on the playlist selection, they may be able to avoid licence fees to the Phonographic Performance Company of Australia (PPCA). Additionally, the StorePlay interface allows companies to pay their APRA and PPCA fees within the system, integrating the process into the app.