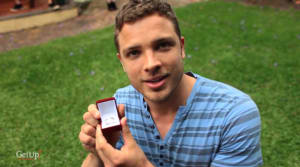 The video, co-created by GetUp! and Motion Picture Company, was released ahead of the ALP National Conference. There delegates voted over the weekend to overturn the ALP's policy platform, changing the definition of marriage to include same sex couples, as well as to allow MPs a conscience vote on the issue of gay marriage.

Samsung Mobile's "Stage - Music to Life" video promoting the Galaxy Note came in at number two. The YouTube 'talent contest' invites people to submit their own creative works and vote for their favourites.

Next on the list was a "bizarre but fun video by tween gaming phenomenon Moshi Monsters", according to Chris Quigley, co-founder of the Viral Ad Network.

"Further down the chart Bonds and VW have stuck around since the last chart, as well as a reappearance from Telstra," he said.

The AdNews Viral Video Chart ranks Australia's most popular brand-funded videos based on a combination of views and natural sharing.

The chart is updated fortnightly based on data from video sharing sites such as YouTube and activity on Facebook and Twitter. Note that the chart shows total views, not the number of views generated in the past fortnight, so those with a higher number of cumulative views may appear lower down in the top ten.