House of Cards in the house 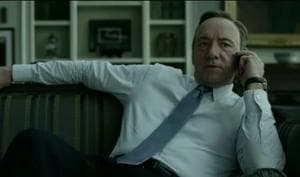 Kevin Spacey appears as Frank Underwood in a House of Cards spoof for The White House Correspondents Dinner.

For Australians eagerly waiting to get their fix of Netflix's House of Cards on Foxtel, here's a sneak peek with a slick spoof from the White House Correspondents Dinner. It's further evidence that, for now, Netflix holds the aces.

You know you've arrived when you can command the opening six and a half minutes of the annual event, also dubbed the 'Nerd Prom', attended by US politicians and the elite funny crowd. The spoof video features Kevin Spacey in character as the unscrupulous Frank Underwood alongside the likes of John McCain, Michael Bloomberg, Charlie Rose and more.

Last week, AdNews argued Netflix and its streaming model could present clear and present danger to linear TV as its cultural equity continued to rise. Netflix is of the same mind. Its chief executive released an 11-page manifesto a few days ago in which he predicted the death of linear TV. So be sure to catch the reference in the video in which it's cheekily suggested neither US network NBC or cable channel TBS are real TV networks.

House of Cards will debut on Australian screens on Foxtel on 7 May. Foxtel will also make the whole first series available on demand from that day, mirroring Netflix's distribution strategy.