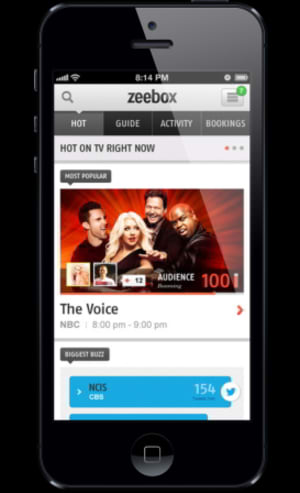 Foxtel has done a deal with Zeebox. The agreement takes the second screen app provider closer to its goal of Australian dominance. More partnerships are set to follow, said the firm, and those with proprietary approaches may be swayed.

Zeebox Australia CEO Craig Blair told AdNews that the application had received 350,000 downloads in Australia since launching in November. Take up was far swifter than other markets given Australia's per capita population, he said. Blair would not disclose how many of those users were active but said average session time was 38 minutes. There were "slightly more female users in Australia" and user demographic had a "slightly younger skew" towards the 16-55 age bracket.

Most popular app use was during reality shows such as Can of Worms and during movies and sports, particularly F1, tennis and cricket, said Blair.

With Ten onboard since launch, the Foxtel deal means that Zeebox has "40 per cent of the TV market in Australia" according to Blair. The firm was "in discussions with other large channels about coming on board" said Blair, with more deals to follow "in the coming months".

Blair would not say whether those discussions were with Nine and Seven, but said public broadcasters and other cable channels were at the table.

Those with proprietary apps may be "thinking about how that plays out against the industry approach," said Blair. "it is likely to be an open platform that wins."

The Foxtel move brings content into the Zeebox app and integrates Zeebox's social TV platform into Foxtel's Guide app. As well as getting access to more content, users will be able to remote control and record shows using the Zeebox app on Foxtel iQ set-top boxes. Zeebox and Foxtel friends can also interact with each other via the app.

For advertisers, a new function could be interesting. Spot Synch enables adverts to be synchronised with TV in almost real time (within 3 seconds). They can be personalised. The app also makes it easier for users to buy the things they see on TV.