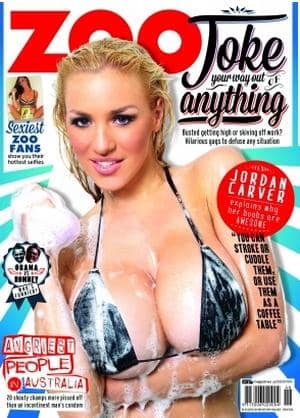 Half-naked women and celebrity gossip may not hold the same sway anymore, with Zoo Weekly and Grazia seeing some of the highest print circulation drops in a weekly magazine market that fell 6.7% year-on-year in the September quarter.

Overall, the market decreased 6.7% year-on-year in the September quarter and sold 1,819,950 copies, according to print circulation figures from the Audit Burea of Circulations (ABC). In the previous corresponding period the weekly market saw 1,950,602 copies sold.

The declining numbers can be seen as a sobering reminder of the unforgiving market, rising reign of digital and tough economic climate that weekly magazines face.

Men's lifestyle title Zoo Weekly, also published by ACP and the only men's weekly in the market, is one among few to have stayed afloat in the particularly tough men's market. Former rivals FHM, Ralph and sports publication Alpha have all faced the chopping block in recent times.

ACP's NW and Pacific's Who and New Idea were spared such significant losses, but declined nonetheless. Meanwhile, New Idea only dropped 1.28%.

However, it was not all doom and gloom as two magazines, Pacific-owned Famous and Fairfax-owned BRW, reported increases.

Pacific Magazines chief executive Nick Chan said in a statement: “Pacific has secured a strong performance in readership and circulation. Our weekly titles have delivered gains in circulation share over the last year, capturing 49% share of the biggest magazine category, women’s weeklies, with just four titles.

"ACP weekly women’s titles sold 12.2 million copies in the three months to September, proving they remain a priority for many readers. Our investment in mobile technology across our portfolio, and in particular for our weekly titles, has resulted in increased time spent with the magazines as well as a deeper connection with the brands.

“At the same time, readers are increasingly engaging with our magazines’ online extensions: websites and social media. ACP magazine websites are visited by an average of 5.8 million Unique Browsers per month, generating an average of 50.2 million page views per month.

“Australian weekly magazine sales remain significant, all the more so given their high pass-on rate with an average of four readers per copy.”