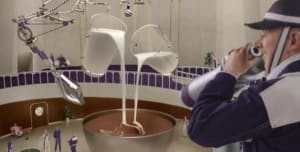 Cadbury has launched a global campaign via Saatchi & Saatchi Sydney, with predictions it will be bigger than 'Gorilla'.

Kraft Foods' Australian managing director of Snacking, Amanda Banfield, recently told AdNews about the launch of a global campaign that will be the “next really big iconic campaign” for Cadbury and predicted it will be bigger than the famous 'Gorilla' campaign.

She said the new campaign will "drive sales even harder" than the 'Gorilla' campaign.

The new campaign will run in markets including Australia and the UK.

It is the first work to come out of Saatchi & Saatchi's recently appointed executive creative director Damon Stapleton. Media was handled by Carat.

The famous 'Gorilla' campaign launched in 2007 and featured a lifelike beast drumming to Phil Collins. It picked up a swag of awards in 2008, including the Cannes Lions Grand Prix for Film.